MicroSolar 42 LED outdoor floodlight is a light fixture that has 180 lumen output and will work for up to 10 hours with that fully charger lithium ion battery. The light consists of two parts where the first one is the floodlight itself but the second is that separate solar panel and they are both separated with a waterproof wire.

This light fixture itself is made from lightweight but durable aluminum housing that will allow you to mount this fixture anywhere you like. It is mounted to any surface with that plastic mounting arm that also allows you to adjust the angle of the floodlight itself with that knob at the top. The bulb head itself sits on a aluminum strap that will allow you to move this light from the left to the right in a circular motion but the bulb head is also mounted on this strip with two hinges and that means you will also be able to maneuver it up or down getting the optimal illuminating angle. 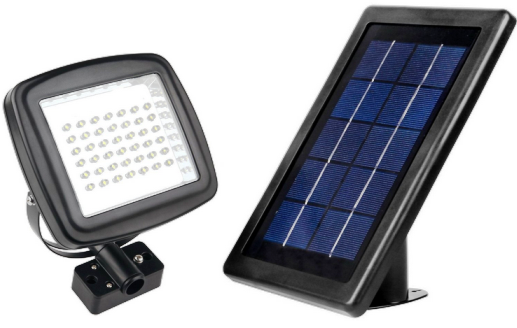 This solar floodlight bulb head is also made from cast aluminum in one shape and it has a glass cove to protect those LED diodes from water abut to also make this fixture rigid and long lasting. Inside that glass cover there are 42 LED diodes that are enclosed in a reflective material and spews out those 180 lumens while consuming only 1.5 watts of electricity and that means they have the lumen per watt efficiency of 120 lumens/watt and that is an astounding efficiency level that rivals all fluorescent fixtures and incandescent ones and even almost all of the high intensity discharge fixtures. Because this solar floodlight uses LED diodes that each consume only 0.03 Watts they can be made very efficient and together make this light one of the most efficient light sources out there. It even rivals many High power LED fixtures exactly in this efficiency rating and if you would make this fixture much bigger it would be one of the most efficient lights not just a solar powered floodlight.

On the back of this solar floodlight bulb head there is also a built in battery pack that has an amazing 2000 mAh power capacity and that means it will be able to supply light from 8 to 10 hours on full charge and that is just amazing. This battery can give off 7.4 Volts of power and because it is a Lithium-Ion fixture it will be in good working condition for up to two years of constant charge and recharge cycles. And that is a great thing that MicroSolar fitted this light with a Lithium battery because those batteries have more charge and recharge cycles than any other battery type and they also have no memory effect that would prevent it from charging up fully!

Then to recharge that battery every day in the package there is also an included Polycrystalline solar panel that can give off 3 Watts of power in full sunlight and that is enough to fully recharge that 2000 mAh battery every single day. Even in low light level this Polycrystalline panel will create power and will be able to recharge that internal battery so your light will work every single night. This solar panel is housed in an all plastic housing and can be mounted either in the grass with that spike or also mounted with two screws on your rooftop or any other place. There is also a hinge that connects that panel with that holding leg and that will allow you to change the angle of this panel to capture even more sunlight and have an even better power output. 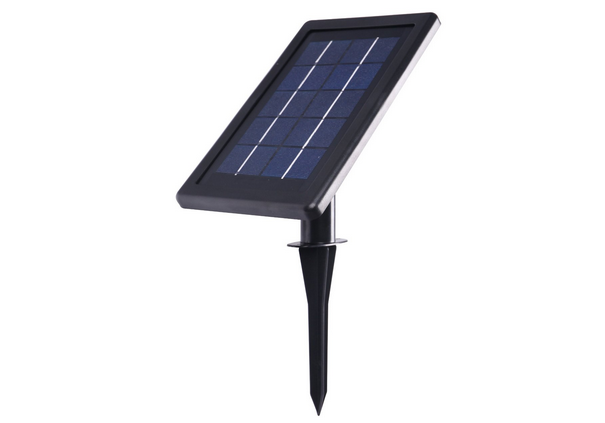 Both the solar panel and the bulb head/battery are connected together with 16.4 feet (5 meters) of waterproof power chord that also has a waterproof connection and will allot you to position both fixtures separately to get even better sunlight coverage on your rooftop or in any other higher place.

I can encourage you to buy this fixture as it has a very acceptable price and the build quality and technologies that are incorporated in there are just amazing. I love that all aluminum housing for the bulb head and that you can position that solar panel separately and mount it almost anywhere.